Developer Strategic Property Partners claims the Edition will offer “a level of sophistication unparalleled in Tampa.” 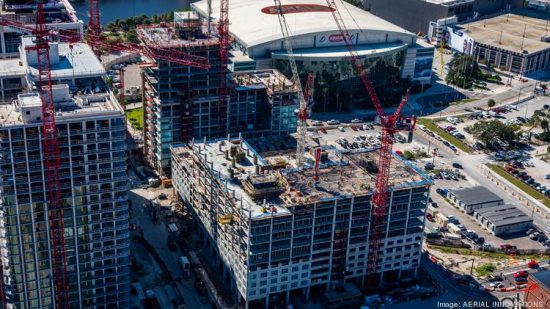 The Edition Hotel under construction in November 2020. – AERIAL INNOVATIONS

The Edition Tampa, a boutique hotel topped with luxury branded condominiums, has reached its full height of 26 stories.

The hotel-condo, which towers over Channelside Drive in Water Street Tampa, includes 172 rooms and 37 condos priced from $1.8 million. It began construction in early 2020. Developer Strategic Property Partners announced the topping out milestone on Monday. The condos are on the top 15 stories of the tower.

As of early December, when a sales gallery opened for the Edition, $70 million in condos had been presold.

Water Street is a $3 billion-plus mixed-use district under construction between the central business district and Channel district.

Ian Schrager, widely credited with coming up with the concept of a boutique hotel, partnered with hospitality giant Marriott International Inc. to create the Edition flag.