A utilities deal was recently signed between Kevin Lalezarian, on behalf of Miami World Towers LLC, and Miami-Dade County, to connect the proposed 53-story Miami World Tower to the city’s water and sewage system.

As per the agreement, the first phase of the development, which is designed by NBWW Architects, will include 565 residential units and a 3,000-square-foot full service restaurant venue. The skyscraper is planned to rise 579-feet within the greater 27-acre Miami Worldcenter development in the Park West neighborhood of Downtown Miami, and is addressed as 700 Northeast 1st Avenue. Lalezarian Properties of New York is the developer.

According to The Next Miami, the total cost to connect the first planned tower comes at over $875,000, which includes a base connection charge of $545,045.25 and an additional charge $330,614 for the special Biscayne Basin sewer connection. The deal was finalized back in June, meaning prep for the site is likely to occur sooner rather than later. The general contractor for the site, Coastal Construction, has a sign up with the project’s name and Lalezarian listed as the developer. 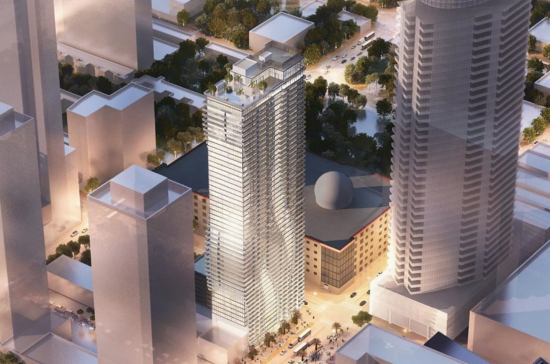